Anyone who spends time with UT junior Wendy Fernandez and senior Pamela Laredo would assume they’ve been life-long friends. They laugh easily with one another, reference inside jokes, and both hail from Round Rock, Texas, where they lived fifteen minutes apart. When Pamela’s high school opened, it drew from the student population of Wendy’s school, so both partook in many of the same traditions and spirit events, but that’s not where they met, believe it or not.

It wasn’t until a Hook ’em Arts meeting during Wendy’s freshman year that the two finally crossed paths. Their friendship was sparked over a shared love of musical theater, comedy, and random YouTube videos. It wasn’t until a year later that they discovered they also shared a hometown and high school experiences.

So, did fate bring them together?

As two of the most active members in Hook ‘em Arts—Wendy is the organization’s historian and Pamela is in charge of all things Bass Pass—one or both of them can often be found in the TPA Student Engagement Office. In addition to their roles with Hook ’em Arts, they are TPA student employees too. They view TPA as a haven among their busy schedules; coming here provides an opportunity to spend time discussing life outside of academics. Wendy majors in English, Pamela in Government. 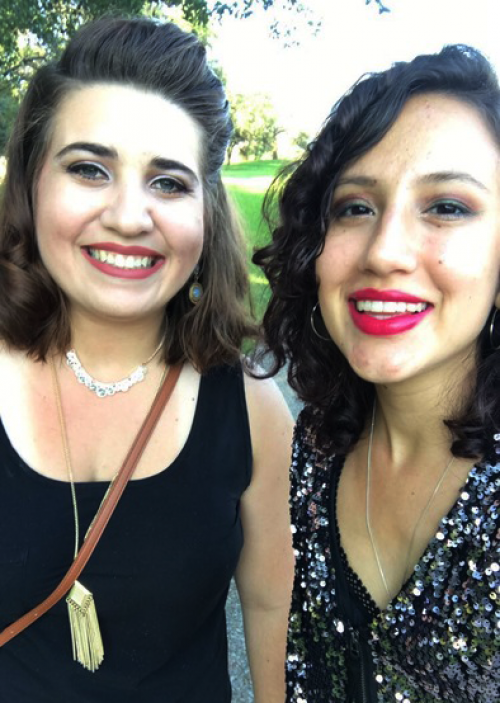 Wendy: We don’t really see each other during the day except for here. And it’s great because I’m around English majors all day and you can only talk about Milton so much before you want to explode. It’s just nice to come, literally away from campus, and talk to someone who’s so far away from that.

Pamela: It’s just nice to come here and not have to talk about all the books we had to read or all the different policy stuff. Don’t get me wrong, I like that stuff, that’s why I’m studying it, but it’s just nice to have those random talks with Wendy.

When asked what they admire most about the other person, each of them noted not only what the other brings to their friendship, but to their involvement with TPA and Hook ’em Arts.

Wendy: She’s just this never-ending ball of energy and I don’t know how she does it. And it’s strange because I do one thing and I’m dead for like five days. And we also have the same kind of sense of humor and we’re into the same things which is great because being from Round Rock, you don’t meet a lot of people who love show tunes as much as you do. We definitely bonded over that.

Pamela: You’re always learning new things and sometimes [the conversations are] really deep and intense and academic, then sometimes it’s just like silly stuff. But there is just always something to talk about and that’s really great because usually when I talk to people, the conversation just ends and then we’re just awkwardly sitting there in silence. [Wendy] just has all the knowledge. And she’s super dedicated. With everything she does with Hook ’em Arts and [TPA], she’s just like “Hey, I’m getting involved this way,” and I’m like, “Hey, I want to do that too!”  [turning to Wendy] So good job! 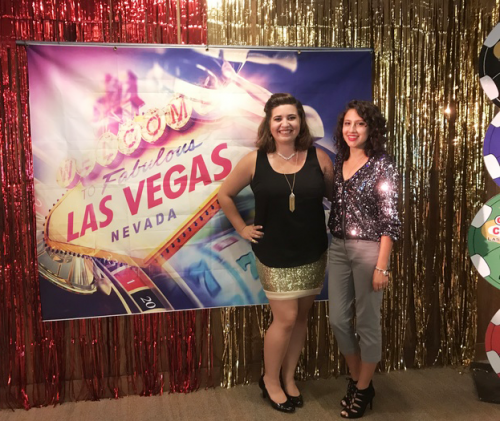 Spending time with each other is just an added perk of the job for these two who are hard at work preparing for the rest of the Loft Events for the TPA season. And while they might get caught up in the craziness of stamping Bass Passes, creating larger than life Marauder’s Maps for events like Harry Potter in Concert, or organizing Broadway karaoke, they always know someone has their back.

Pamela: It’s great because it’s kinda chaotic, but we get everything done and it’s a lot of fun.

Fernandez: There is not a single day that I dread coming to work.

Learn more about Hook ’em Arts, Student Employment, and other opportunities for UT students at texasperformingarts.org/students.